We departed at 6.45am again hoping to get to Queens cove before the 30 knot winds appeared. This time we were in luck. It was calm, only 5 knots of wind but it was foggy so we navigated our way past rugged point under radar. Once a couple of miles offshore the fog cleared a bit so that visibility was about ½ a mile.


Queens cove was empty except for a loggers or fishers camp on the south shore. I went exploring in the Kayak, had a look at an old wreck and paddled up Park River as far as I could go. Linger Longer and Loon came into the anchorage. Jude and Katya had baked some muffins and Katya strapped a sign to herself and went on a muffin delivery mission to the other boats. Taylor and George very kindly agreed to “lend” us Roscoe for the night and it was great to have a dog on board again. Roscoe got a lot of attention that night.
Posted by Sailing Sarita at 9:52 PM No comments:

The morning forecast told us of an approaching low that would bring strong winds from the south for a few days so we decided that we would move on and seek a more sheltered anchorage to wait out the bad weather. Petraglyph cove is a very sheltered anchorage with a narrow entrance and room for about 4-5 boats but we were the only boat there. Jude went off exploring in the kayak whilst I made some bread. The evening passed with no events and little wind. I really don’t think you would notice a storm whilst in this cove, it’s so cozy. 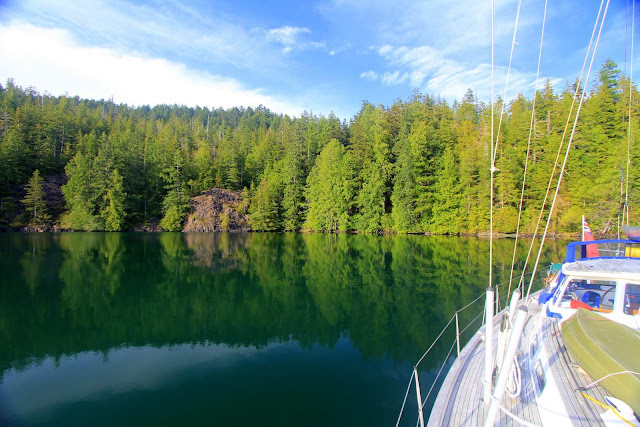 The following day Taylor, George and Roscoe the dog arrived on Loon, followed by Kirk and Kristan on Linger Longer. They had spent the previous night in Dixie cove, just around the corner. We invited everybody over for supper and Jude cooked a lovely meal. George and Taylor bought Roscoe over as well and they kindly donated a jar of Nutella. 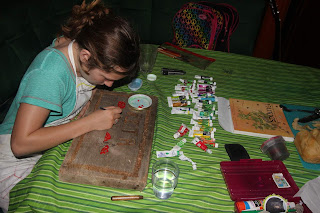 The following morning we departed at 7am to see if we could get around to our next anchorage before the winds picked up but as we rounded rugged point the wind picked up and were gusting to 27 knots true on the nose with waves on the bow. We decided to turn around and head back. As we turned around we could see Linger Longer coming around the headland, we talked on the radio and they decided to head back as well. Taylor and George also had come out and turned back have heard what it was like out, so we all bolted back to safe anchorages.
Posted by Sailing Sarita at 9:50 PM No comments:


We made our way up the north side of the Brooks Peninsular with its 2500ft mountains rising dramatically from the water’s edge. We rounded Cape Cook with Solander island to port. A group of puffins lifted off the water close to the boat. Just to the west of the Peninsular we saw many humpback whales feeding in these rich Pacific waters, one of which was very close to the boat, probably 20 feet or so.


There were a few other boats on the Bunsby islands and we chose to anchor in a small bay off Gay Passage. I dropped a kayak in the water and took it through the islands exploring and into a lagoon. 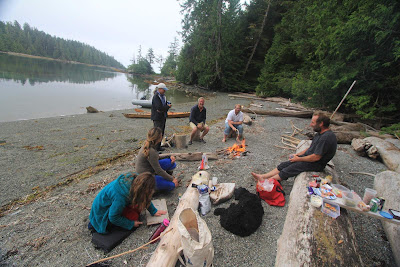 When I returned Loon, the yacht we had followed out of Bull harbor, was anchored in the same cove, George was on the rock hoping to photograph some sea otters. We chatted a while and he told me much about sea otters. Kirk and Kristen came over in their dinghy and said that they we having a fire on the beach in the evening and we were invited. So it was that Kirk and Kristen from Linger Longer, Taylor and George from Loon and ourselves went over to a beach and lit a fire, ate and had a few drinks and watched the sun go down.
Posted by Sailing Sarita at 9:47 PM No comments:


We sailed across Brooks Bay to Klaskish inlet with its narrow entrance. One other boat was already there – Linger Longer – great name. Jude and Katya went kayaking and the guys on Seventh Son arrived. We invited everybody over for drinks in the evening. And we met Kirk and Kristen from Linger-longer who moved aboard their boat earlier this year.
We pottered about the next day, Katya went with Larry and Nathan in the dinghy up the Klaskish river and Jude and I followed in the dinghy. Linger Longer departed early.
Posted by Sailing Sarita at 9:44 PM No comments:


We timed our departure to coincide with low water slack, it would have been better to transit the bar at high water slack but that would have meant a late departure. We crossed the bat with a high swell lifting the boat up around 15-20 feet at times, like a giant rollercoaster. Quite fun as they were not breaking waves / swell. We had followed another yacht out of Bull harbor – Loon and we followed them up the coats and passed them as we rounded Cape Scott. The currents slowed or progress through the channel to around 3 knots at times but it only lasted a mile or so. Loon headed off to duck into Otter Cove whilst we carried on to Winter harbor.
We tied up at the dock and met up with some people on another yacht, Larry, Karen and their 11 year old son Nathan on Seventh son. They are traveling around Van island from Saltspring. The told us that it would be $1 a foot to tie up with no water or electricity so we decided that we would anchor out having bought a few provisions at the small store. We also decided to put top up on fuel and water. The fuel dock manager was VERY gruff, to the point of being rude, most out of place. The water ran slowly and it took us about an hour to fill our water tank up before we departed for the North Harbour anchorage where Seventh Son was already anchored.
The winds picked to 25kts in the anchorage up in the morning so we decided to stay put. We baked some scones and Katya and I kayaked over to see the guys on Seventh Son. Katya and Nathan did some artwork whilst Larry, Karen and I chatted. In the afternoon Loon arrived in the anchorage along with Pacific Grace and another SALTS schooner with kids on board.