Touted as one of the least rolly anchorages in the Marquesas Island it is also where the hike up to the beautiful waterfall commences. Our friends on Family Circus said they called the walk the Garden of Eden walk so we looked forward to seeing what was instore for us.

Pesto and Enough came into the bay and in the evening everybody, including Tim and Lindsey from Sababa, came over to Sarita for a few drinks. We enjoyed catching up with everybody and hearing about their passages from Mexico. Katya enjoyed being reunited with her friends on Pesto and Enough.

At 9am the VHF radio blurted out our boat name: “Sarita, Sarita, this is Sababa” We answered Tim who was calling us to see if we still wanted to go on the hike up to the waterfall. “Sure” we said, wondering if our slight hangover from the previous evening might make this walk a little more difficult than normal but it would probably be the best thing we could do so we packed lots of water, mosquito spray and an assortment of energy bars and off we headed in the dinghy to meet up with Tim and Lindsey. Amber and Katya decided to stay and do their own thing. 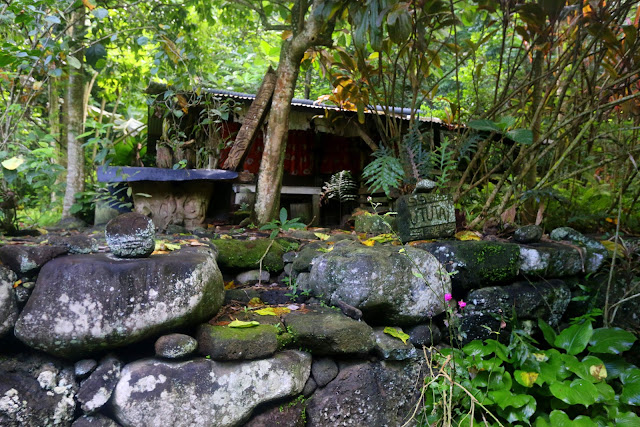 The walk first takes you into the small village but to arrive there you have to cross a river which is about waist height but very refreshing. I suppose it is misleading to call it a village as there are only three or four houses. 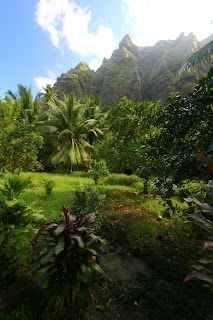 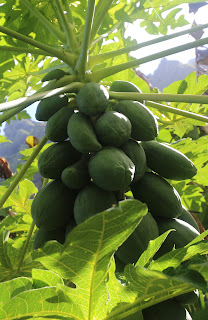 The lady that owned the first house we passed came out to greet us and ask us if we wanted some fruit and a meal on our return, unfortunately we did not bring any money but we promised that we would return with some friends in a day or so.

The start of the walk goes through lush fruit orchards of papaya, pampelmousse, bananas, oranges and mangoes, although not in season. The high mountains, covered in luxurious vegetation act as a back drop to the walk which meanders up the valley crossing small refreshing streams, large rivers and muddy bogs. The further you go the narrower the track becomes and the denser the jungle. Remnants of a past civilization are abound: Perfect stone walls, pathways, house platforms. Apparently about 10,000 people once inhabited this valley before the Europeans wiped them out with western diseases and Catholicism. 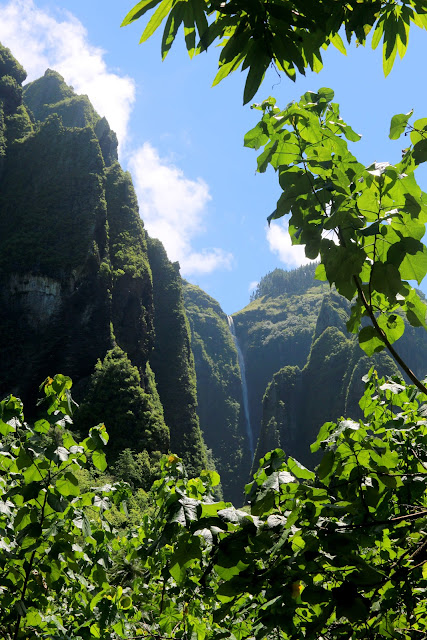 The path came to an abrupt end at a river. The crossing looked deep and no sign of a path was seen on the other side. We explored up and down the bank but could not see an easy way across. Just as I was about to attempt a crossing I saw something large stirring in the water. Did I really see that? It was a very large eel, probably 5 feet in length and 10 inches across, if we were going to cross here we would have to hope this eel was not aggressive but maybe that is why he is so large. We all crossed safely, the eel hiding under a rock and found the path on the other side which continued on to the waterfall which is 350 mts high and supposed to be the third highest in the world. Tim and I continued on to the base of the waterfall along a difficult path and found the pool at the base of the fall to swim in. After a sticky and hot walk, it was great to have a cooling swim in this wonderful oasis. Quite spectacular.

We walked back along the same path admiring the lush tropical vegetation and wondered why nobody has re inhabited this wonderful place that once so many people lived in. I think this has to go in my diary as one of the most beautiful and satisfying hikes I have done. Well worth the 5 hours.

The following day the crews of Sarita, Enough and Pesto went for a traditional Marquesan meal of steamed shrimp in coconut milk and rice at one of the local houses. To get to the hosue we had to take our dinghies into another small bay and up the river where we tied up by a coconut tree and then walk a short distance to their house. The wife spoke good English and the heavily tattooed Marquesan husband spoke mainly Marquesan and some French and they were very hospitable. The food was very plentiful and tasty. I had brought along some rum and pineapple juice as I had heard they would be serving fresh coconut juice so we made adapted Pina Coladas and enjoyed the meal and company before heading back down the river in darkness. 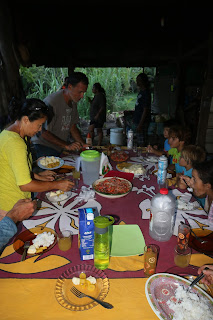 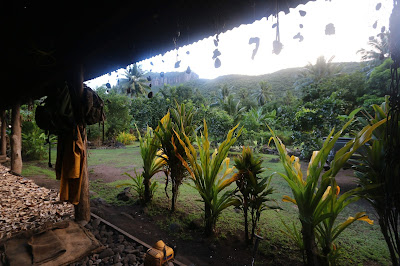 Another reason we came to Daniels bay was to complete our overdue sail repairs as we needed a stable and non rolling anchorage so we pulled the main sail down, cut out the torn part of the sail and attached a new panel at the foot of the mainsail. No we hope it works! 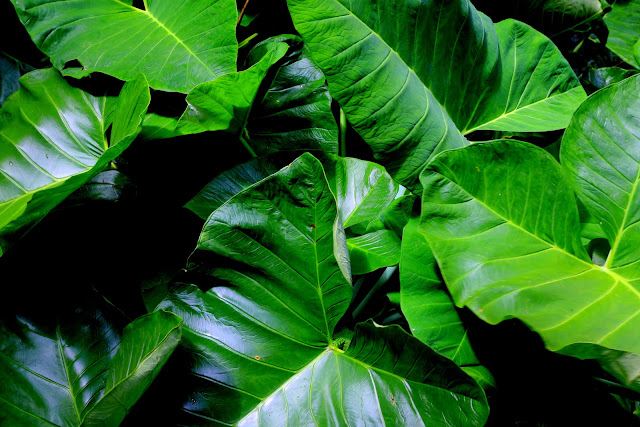 Posted by Sailing Sarita at 4:45 PM No comments:

It was time to start making our way to the northern Marquesan islands but rather than do an overnight passage, still hand steering, we would go to Hanamenu bay on the northern side of Hiva-Oa and then make an early departure for Hakatea, or Daniels Bay on Nuka-Hiva the following morning.

The wind was coming from the east so we had a nice sail on a beam reach to our destination where we were pleased to see that there we no other boats in the bay. We sat back and relaxed and watched a commotion on shore and a small group of men led a horse onto the beach, hobbled it, carefully dropped it to the floor and proceeded to tie it up. We speculated what they were doing. Were they operating on it, was it about to give birth but why do it on the beach? Then a small speed boat came into the bay and the 4 men tried, without success, to get the horse into the 15 foot boat all while a small surf drove onto the beach making it an impossible task. Thankfully for the horse they gave up the endeavor and the boat left and the horse was set free.
Posted by Sailing Sarita at 3:31 PM No comments: 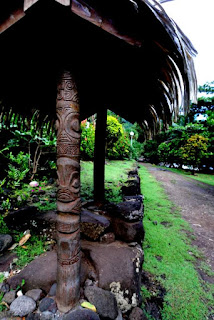 Hapatoni Bay is just a few miles south of Vaitahau so we motored the short distance and surveyed the anchoring options. The bay to the north of the Town looked pretty crowded with boats, some 12 cruisers and given that the anchorage depths dropped off pretty quickly to 140 plus feet I decided to have a look for another place nearer to town. The charts showed a sandy patch in about 40 feet so we lowered and set the anchor all on our lonesome which was nice for a change. The spot was a bit more rolly than where all the other bats were but we just did not feel like being anchored among all the others given everybody was in close proximity. 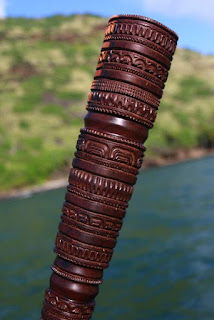 The very traditional Marquesan village of Hapatoni has its own well maintained small boat harbor, a pleasant surprise, where the dinghy could be tied up to and is very close to the main street. The village itself has one main dirt street with well-maintained houses on one side and the ocean on the other side. The short walk through town is about ½ mile and I doubt that much has changed here for a hundred years or more apart from street lighting. The locals are very friendly and I asked a man who was sitting carving under a palm fringed roof where we might be able to purchase some of his work. He told us to visit another building where 5 local bought out a selection of locally made items including bone carvings, word carvings and local instruments. We had head that this was the place to buy Marquesan carvings so we purchased a traditional ceremonial horn that was made by Ernest, the man I had spoken to earlier. 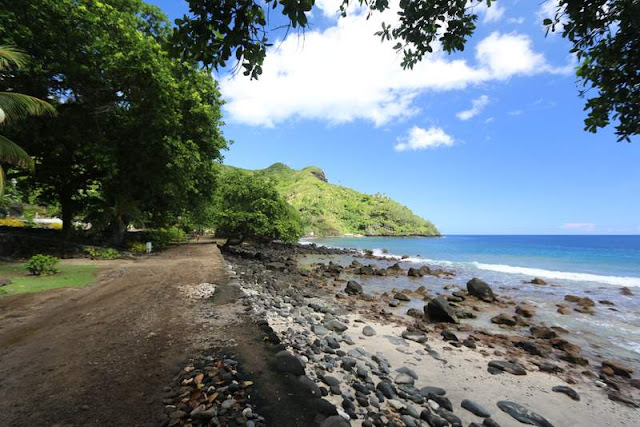 We wondered through the village again looking at the church, school and pigs before we headed back to the boat for a swim and an evening meal. 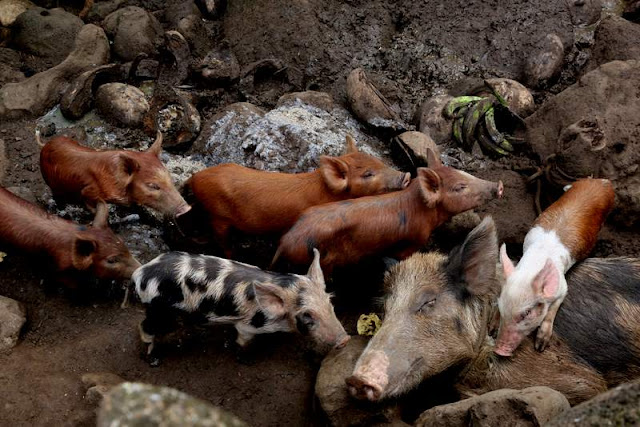 Posted by Sailing Sarita at 3:27 PM No comments: