As luck would have it we were on a mooring buoy in one of two hurricane holes in the sea of Cortez when the first hurricane warning of the season came through on the weather forecast. Hurricane Blanca was forming off the coast of Mexico about 400 miles away and some predictions called for it to come up the sea towards us. We have spent the last few days here listening to the forecast and working out if it is going to hit us or not. Winds at the center are forecast to be in excess of 120mph

Whilst waiting to see what Hurricane Blanca was going to do we took a taxi into Loreto, which is a beautiful old Mexican town on the coast. We made the most of the WiFi and walked around the town checking out the local stores and Katya and I both had much needed haircuts.

Back in the anchorage we met up the family on Adagio and met a Brazilian family on their Hallberg Rassy 53 Pesto.

We now listen to the forecast and try and download the latest information on the path of the hurricane but it has stalled and is indecisive in which direction it will go. Meanwhile we have to hang around and swim off the back off the boat to cool down. We have put up our full boat covers to try and provide some relief against the hot and long sunny days but thank goodness the humidity is still sitting at a low 50% which makes it not too muggy and pleasant to sleep at night.

As other cruisers know only too well it’s never long before something on the boat needs fixing and for me it was the generator which was playing up again by overheating. Although we have installed the solar panels which are more than capable of keeping up with our electricity demands even with more refrigeration requirements the generator needs to be run every two or three days to power our 40gal an hour watermaker. The generator has been temperamental ever since we bought the boat and a cause of frustration as sometimes it overheats within about an hour and others its fine. The generator automatically shuts down before any damage is done to the engine.

I traced the problem to the heat exchanger and have run a lime scale remover called Rhydlyme through it and it seemed to work but only to find out that the fix was temporary. I pulled the raw water system apart and put a new thermostat in and tested the freshwater system but still a problem persisted. After much thought, swearing and sweating in an engine room that was over 110 degrees I thought I would try back-flushing the heat exchanger by running the raw water through the outlet of the heat exchanger rather than the inlet. At first only a dribble came out, proving that there was still a blockage and then there came a gush and with it a flow of all sorts of what can only be described as crud which included bits of old rubber impeller and a home-made silicon gasket! Halleluiah!! (No I am not religious). The previous owner must have had a shattered impeller and replaced it without pulling the bits out and then making a gasket which became sucked into the heat exchanger. Finally the generator runs at the correct. A beer was downed quickly and a refreshing swim had. 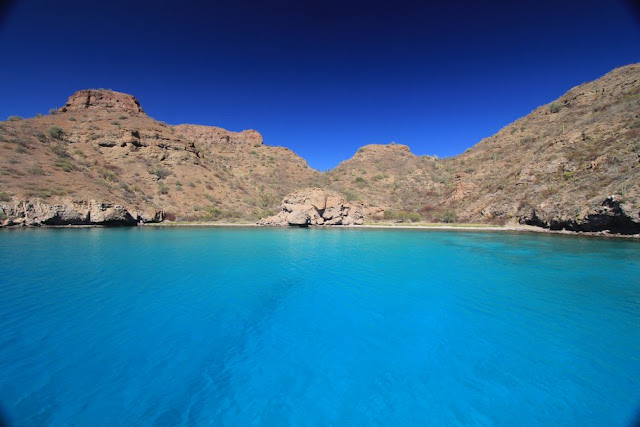 Our intention was to check out an anchorage on Isla Monserrate but the winds were in the wrong direction and would have meant for a rolly stop over so we sailed on to Caleta Candeleros Chico, which is a one-boat anchorage just south of Puerto Escondido. It’s a wonderful little anchorage with clear waters and a white sandy beach but it had stinging jellyfish so we had lunch and moved on to Honeymoon cove on Isla Danzanate, yet another picture postcard anchorage but again with stingers AND bees. Jude was trying to make supper but 30-40 bees had entered the boat in search of fresh water making cooking a bit stressful to say the least. Katya had solved the jellyfish problem by suiting herself from head to toe in stockings which worked just fine except she looked like some sort of child ninja.


The bees became too much and we decided that we would cross over the channel and go to Puerto Escondido. 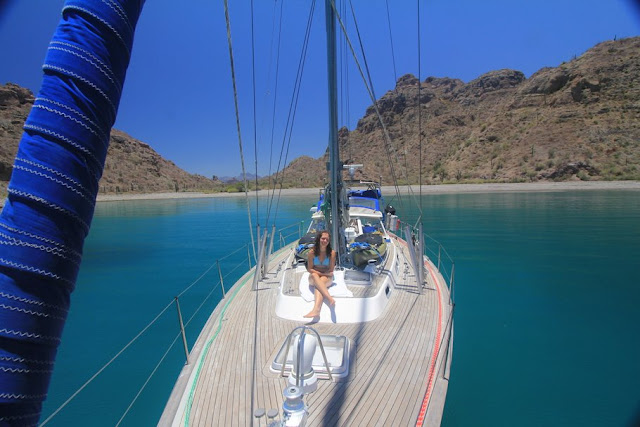 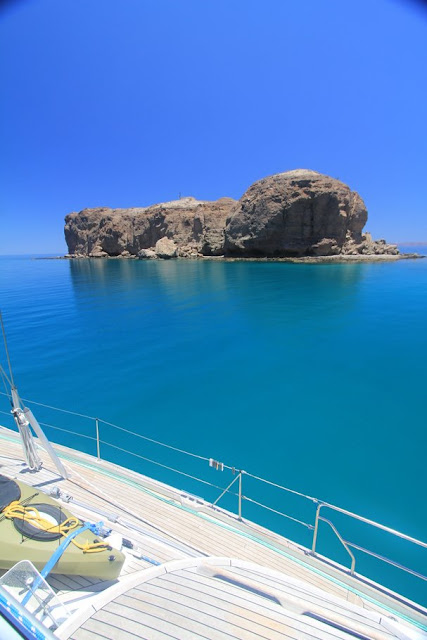 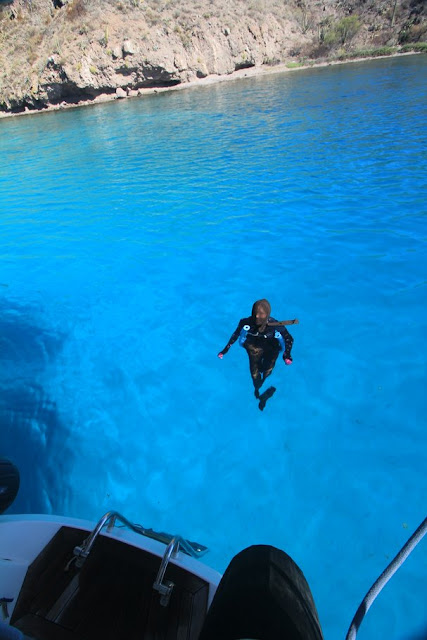 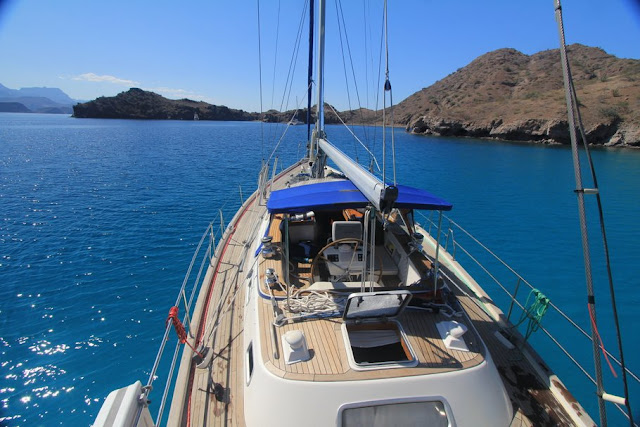 Posted by Sailing Sarita at 6:20 PM No comments: 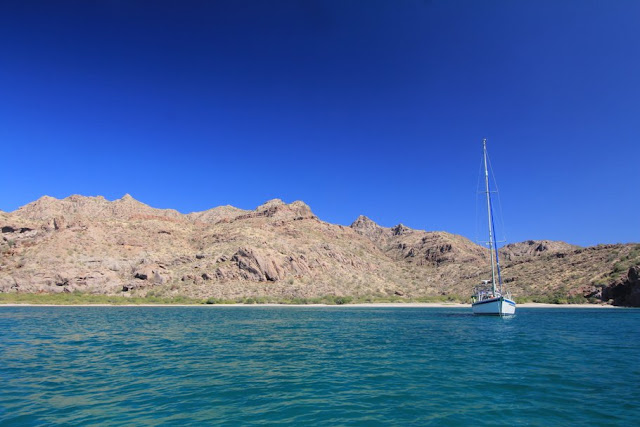 We motored the short distance to Aqua Verde where our friends, Jamie and Elaine on Tardis, were anchored. We dropped the hook in the southern anchorage which we had all to ourselves and Jamie and Elaine came over for a chat before heading into town to get some lunch and find the fabled goat’s cheese. Calling Agua Verde a town is a bit of an overstatement. It is a collection of small houses with dirt streets a couple of very small stores and a small church. Enterprising Jamie corralled some local children and got them to show us the way to the goat’s cheese house where as luck would have it Mama had just finished pressing a fresh roundel which we shared between us. The cheese is more like a mozzarella rather than a traditional feta type cheese; it seems to be the Mexican way of making cheese.

We spent the afternoon snorkeling in the reef and swimming when a convoy of five boats came in the bay and anchored all around us. We prefer being on our own but it is not bad having other boats around as long as they don’t anchor too close so we have to be concerned about swinging into each other. 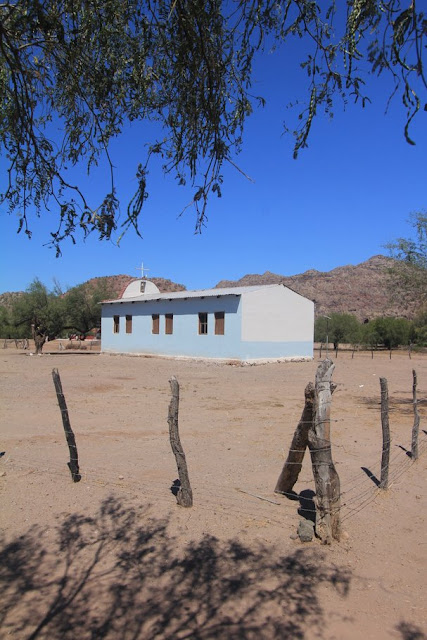 Posted by Sailing Sarita at 6:04 PM No comments:

Again we set the sails as soon as we weighed anchor and made our way to Bahia San Marte, stopping for about an hour in Ensenada Ballena to look at the sea cave, which was nothing really to write home about. Bahia San Marte is reputed to have a great reef to dive on and we thought it was a good opportunity for Jude and I to share our first dive together. We readied our equipment and had a brief moment of disappointment when Jude’s new BCD was leaking. It turned out to be a faulty dump valve which we managed to repair. We had a short and shallow dive on the reef and both enjoyed diving together for the first time and we look forward to doing more. Now we need to find a dive compressor to fill our tanks.

Posted by Sailing Sarita at 5:55 PM No comments:

We departed Bahia Los Angeles and stopped off at a beach on the northern side of the island which had been touted as a good place to find shells, which turned out to be a bit false. Maybe once but as we know if it’s in the guide book everybody knows. Either way we had a nice walk and a cooling swim before we set off for Los Gatos our next overnight anchorage. Again the wind was favourable and we sailed up through the channel between the Baja and the island of San Jose. We went into San Everisto but it did not look like a place we wanted to stay at – we wanted isolation so we carried on towards Los Gatos. The winds lightened and we dropped the sails as our boat speed fell below 2 knots – our new low speed limit for motoring – as luck would have it the winds picked up once we came out of the channel and we had 10 knots on the beam and were soon making over 7 knots through the water in flat waters. Marvelous!

There was one other boat in the northern anchorage of Los Gatos so we opted for seclusion and took the southern anchorage and went ashore to explore one of the beaches.

The next day we took George to another beach and snorkeled on the large reef seeing a good selection of tropical fish. Later Katya explored on one of the other beaches and came back very excited having found a number of geodes with crystals inside. Katya and I spent the next few hours scouring the beach for good examples worthy of taking back to the boat. 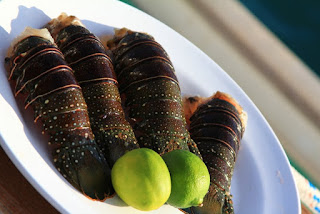 In the late afternoon we were approached by a local fisherman trying to sell us fish and we ended up buying 4 lobsters from him for the bargain price of $15 or £10 which we cooked on the BBQ with garlic butter and accompanied with a nice salad. Delicious!

Los Gatos is yet another beautiful anchorage with impressive geological formations: rich coloured sandstones highlighted at dawn and dusk, high peaked mountains void of vegetation showing their striated formations – a geologists dream I would imagine. 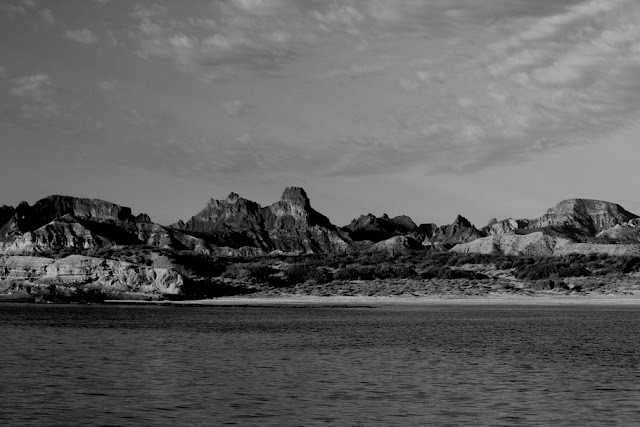 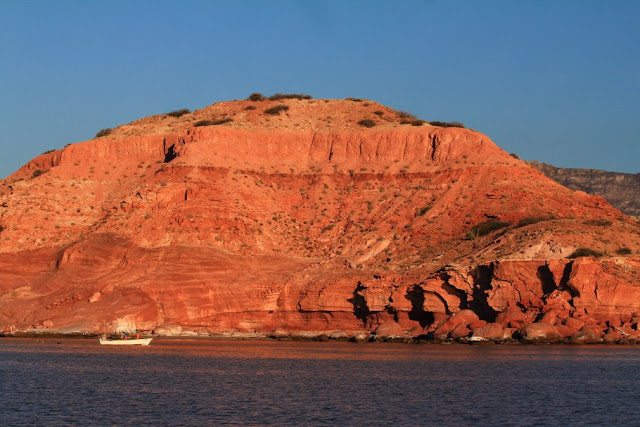 Posted by Sailing Sarita at 5:53 PM No comments: