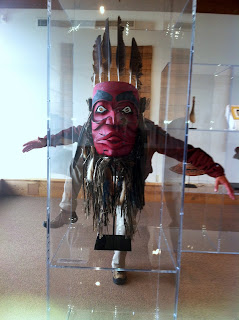 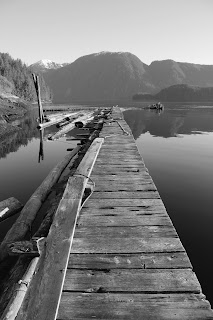 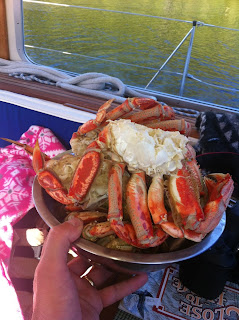 
Our departure time from the Octopus islands was to be dictated by slack water for the nearby Okisollo Channel rapids which were running faster than usual due to the full moon spring tide the night before our departure. Passing through the rapids at anything other than true slack could mean disaster, according to the pilot books. We naturally decided to heed their warnings and departed the islands at a relatively late 9:30 am. Late because we our intentions were to try and get to Port Harvey about half way up Johnstone Strait. The trouble with having to wait for slack water through Okisollo channel is that firstly it makes the day shorter for our long journey but combined with flood spring tides we could be facing strong currents against us most of the way. The only alternative would be to wait for a few days until slack water coincides with an ebb current in the morning or take the long way around through Dent rapids which could be even worse. We had to go and suffer along day. The days forecast was for favorable southerly winds pushing us along the strait. 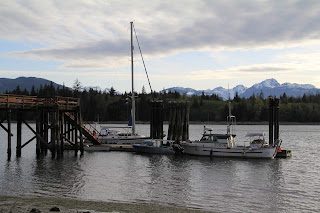 We transited the rapids safely and worked the back eddies along the shore and down to Discovery passage and then up into Johnstone strait. We lost about 0.5-1.0 knots with the current. All was not too bad, that is until we came to a waist in the channel where Chancellor Channel meets Johnstone Strait, slightly east of Helmcken Island, still working the back eddies we were making good speed until we entered the bowl. The water seemed to be boiling. The engine was on and we were doing 7 knots through the water but only 1.5 over ground. That’s 5.5 knots of current against us. We very slowly made our way towards Helmcken Island where we decided to wait out the tide in Billygoat Bay. A wise choice I believe. We ate and had cups of tea and at 4:30pm we headed out again. The tide was now with us and the winds had built to 25-30knots slightly forward of the beam. Up came the sails for a lumpy sail in heavy chop and boiling water. We decided that it would be prudent to shorten our journey and stop in Port Neville instead of Port Harvey. We were very pleased we did. Once we rounded the headland the winds died down and we pulled up alongside the single government dock in front of the historic Port Neville store and post office which closed back in the ‘60s. We tied up and went to stretch our legs and have a look at the old store which was being looked after by an elderly couple.   We prepared for an early departure and had a very peaceful night’s sleep. 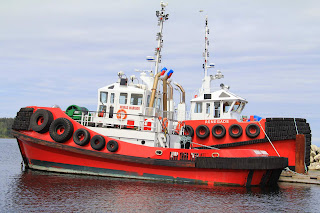 The following morning we arose at 5:30am and were out in the Johnstone Strait again by 6:10am. This time it was quiet. We still had current with us and we were making good progress towards Port Mc Neill where we would be performing our last provisioning before reaching Prince Rupert in a few weeks time.

We had been to Port McNeill last year on our trip through the Broughtons and remembered the shops to have a good choice. The following day we stocked up on all our essentials and non essential “treats” that one can buy in Canada and not in the USA.


Our intention was to leave the following morning for Blunden Harbour, 25 miles across the Queen Charoltte Strait to the mainland. Unfortunately the forecast was for strong winds so we decided to wait for the slightly lighter winds the day after. As it turned out the winds would have been perfect for our crossing. 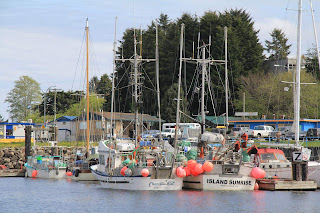 We departed for Blunden harbor early in the morning. (It seems to be getting a bit of a habit getting up at 5:30am). As we moved north of Malcolm Island the winds built to 15-20 knots. We hoisted the sails and turned the engine off. We could not make a direct passage to Blunden but had to beat our way there but that was OK as we had plenty of time. The winds continued to build and we had 25-30 knots true. It was a little choppy and we had some of the first ocean swell we have experienced for quite some time coming in off Queen Charlotte sound.

We arrived in Blunden harbor, dropped the hook and had another peaceful night at anchor. This is the point at which the journey starts to get more remote. The nearest town from now on is Shearwater which on our plan we would not reach for another week. We also had to do the first bit of open water to Fitz Hugh sound. We were looking forward to it but also a bit nervous about it as it’s been a while since we have left the protected waters of the inside passage.

Our plan was to stay in Blunden harbor for another day and explore the area but listening to the forecast we heard that 25-30 knot southeasterly winds were forecast for the following day so we decided to make the most of these favorable winds and departed again early the next morning with the ebb tide. We had a wonderful sail and were making good speed - 8 knots over ground with just a heavily reefed headsail. It started to get choppy from the outflow of Slingsby channel and even choppier around Cape Caution. I think the girls had had enough. The visibility was deteriorating with the rain and we were pleased to head into Smith inlet and the lee of the wind and towards Millbroook cove. We dropped anchor in the rain and put the kettle on.

Millbrook cove was just an overnight stopping point so we departed the next morning for Fury cove on Penrose Island, SE on Fitz Hugh Sound. Before we exited west out of Smith Sound we headed about 2 miles east to Dsulish Bay where it is reported that sometimes bear, cougar and puffins hang out on a pristine beach. We dropped the anchor in 40ft of water, the sun came out and we had breakfast whilst eagerly awaiting the arrival of the wildlife. Nothing appeared so we headed out of Smith Sound, through Irving passage and North to Rivers Inlet and Fitz Hugh Sound. The waters were very choppy and the 3m ocean swell made for a bit of a rocky ride. Once we rounded the headland we put the sails up which steadied our movement, cut the engine and had a wonderful beam reach sail all the way to the entrance of fury cove.


Fury Cove is one of those anchorages that makes your heart beat faster when you enter, faster that is with excitement and amazement at the beauty and protection of the place. The cove looked west out onto Fitz Hugh whilst offering good protection. White beaches on the surrounding islands beckoned to be explored. We rowed over to the islands stretched our legs and explored the islands where we found a wooden hut that looks like it is used occasionally.

The beautiful Passing Cloud came into the anchorage the following day and we admired its looks.


We decided that we would have a long journey the following day and go straight up to Eucott Bay where some natural hot springs were reported to be. The journey was over 70 miles so we expected a long day. SE winds of 25knots were reported so we might be lucky and get to sail. From now on the sailing is likely to be less frequent. The winds tend to go straight up or straight down the inlets so they are either on your nose of behind you. The motor is likely to get more use now. The SE winds never eventuated and we had rater a monotonous journey up to Eucott Bay which is on the upper north side of Dean Channel. The entrance to the bay is through a dog leg where it rapidly shoals from over 300 feet to single digits. We were entering on high tide (13ft) and at one point we only showed 10ft below us. The chart showed 6ft at low tide. Note to self to exit on a high tide and try a different exit route closer to the cliff on the SE side.

Again we were immediately awestruck by the bays beauty. High rising snow covered peaks all around us. Grassy areas at the waters edge on the north sides and we saw our first bear of the trip! 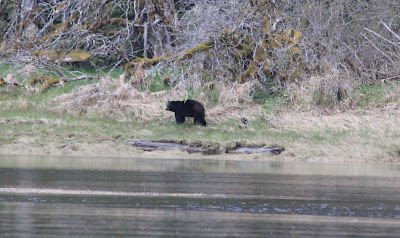 We anchored in 21 foot of water near the hot springs and put the dinghy in the water to go and try and get a peek at the bear we had seen earlier before going for our much needed hot spring bath. We could not find the bear we had seen earlier but were rewarded with a sighting of another black bear on the NE shore. We approached to within 300 meters and watched as the bear grazed and rolled about in the grass. We all had big smiles on our faces.

The bear slowly wandered off back into the forest and we made our way to the hot springs ½ a mile away.  The hot springs certainly did not disappoint. The temperature was perfect, the view was outstanding and the weather allowed us to enjoy a wonderful hot bath in the majestic surroundings. Again not another sole around for miles. 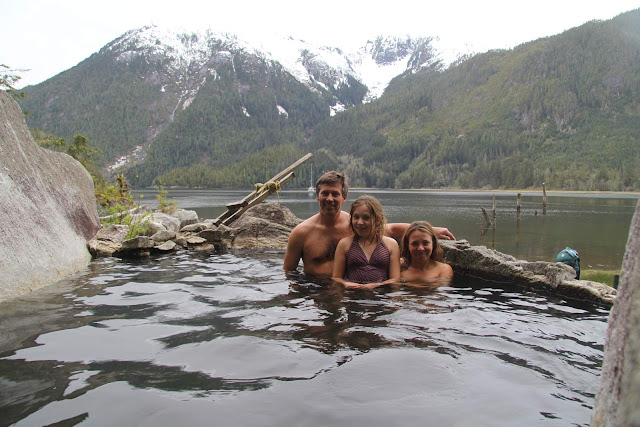 The following morning we caught the high tide at 6:40am to exit Eucott Bay and head south to Troup Narrows. Again it was a motoring day and it was raining. At the confluence of Roscoe Inlet and Johnson Channel the visability deteriorated and Jude was on bow watch as we entered the anchorage at a snail’s pace. We dropped the anchor in 45ft of water and the fog started to lift and expose yet another beautiful anchorage. (I am not sure how I am going to overcome sounding repetitive with my descriptions of all the wonderful anchorages. Each one seems to be so amazing).

Whilst Katya caught up on some schoolwork I went and dropped the crab trap in the water and went for a kayak. In the evening I took the dinghy out to the opening of the anchorage and sat fishing for about an hour whilst feeling a little insignificant in this huge landscape. I managed to catch a rock sole for supper and the crab trap yielded a very large Dungeness crab. We sat eating the fish whilst washing it down with beer. The fish remains went back in the crab trap to be left overnight. Our expectations were high.

We awoke to a sunny morning and not as cold as it has been over the past few days. In Eucott Bay it got down to 1 degree Celsius overnight and only 8 degrees in the cabin in the morning. No heating necessary and the kettle was on before we went to check the crab pot. Our expectations were not to be let down. The crab trap yielded another 3 very large specimens and Jude quickly cooked them up whilst we ate the crab from the previous evening.
Posted by Sailing Sarita at 12:24 PM 1 comment: