Niue, known in Polynesia as “The Rock”, is situated about 2400 kms north east of New Zealand  with a decreasing population of about 1200 people and is a self-governing state associated with New Zealand. Niue is one of the worlds largest coral islands and consisting mainly of limestone, much of which is very jagged and rough. 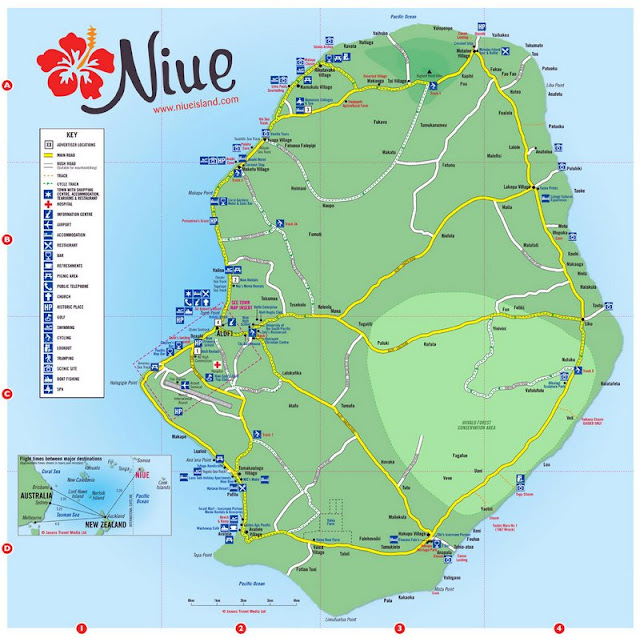 Arrival - We hailed the Customs and Immigration office on the VHF radio and made an appointment time for the following morning to check into the country, they would meet us at the dock and take us to their office which is a few miles from the wharf.

After a passage of a few days we are all normally exhausted so we were all looking forward to a good night’s sleep and exploring the island over the next few days. 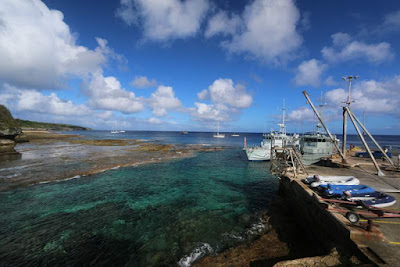 There is no dinghy dock as such in Niue just a ship wharf which in times of low swell is OK to tie up to but if a swell comes in then it can quickly destroy the dinghy so the locals have implemented a rather ingenious way of dealing with visiting dinghies: they have installed an electric crane to lift your dinghy out of the water, it is then placed on a trolley which looks a bit like a pizza shovel which you use to take it to a dinghy parking area. All sounds easy enough but with a large swell it is quite entertaining to watch.

The check in formalities were quick and painless – no fees and no boat visit and the officials were very pleasant. They collected us from the wharf and drove us the 5-6 miles to their offices where we completed a number of forms and then they drove us back to the wharf.

We were very pleasantly surprised by the shops and restaurants of the island, having a pretty good selection of produce we had not seen for some time and even some Australia and Kiwi items and there was a curry house!! Sign of civilization again.

We hired bicycles the following day to explore some of the caves and natural swimming pools that proliferate around the island. As the island is pretty flat, I think the high point is only 120 feet, cycling was easy even though the roads were a little rough it was great to do some exercise. The caves and pools are well marked by blue signs on the side of the road and there is usually a short walk to the area. We were blown away by the beauty of these places, so much colour and natural beauty but the great thing about these sites is that we had them all to ourselves – no jostling with other tourists! We bathed in the clear spring waters in caverns and walked along the edges of coral reefs to view the numerous caves on the predominantly limestone island. It was all great and then Jude slipped in a cave which was followed by a sharp crack, sounding like a splintering stick, and we all knew Jude had broken her arm. We walked back to the road, Jude feeling feint and nauseous, and flagged down the first passing car who were very kind in taking here to the hospital. Katya and I took the bikes back to the rental office, again kindly being picked up my a local who put the bikes in the back of her ute and then driving us to the hospital. 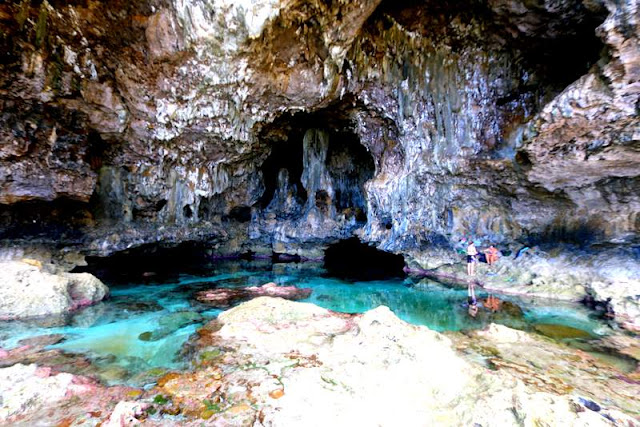 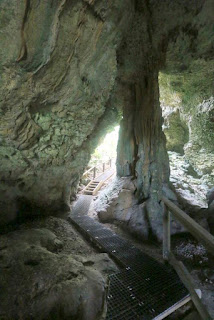 The hospital was very new but completely empty, not a single patient in the whole place, they must be a healthy bunch. The receptionist called the doctor in and then the radiologist who confirmed the break having seen the x-rays. Luckily the break was clean and no setting was required just a splint and bandage. At the end of the treatment we were presented with a bill for just $45!

Not to be held back from exploring we joined Neil and Jesse and Mark and Ursula (S/V Anahoa)  in a minivan that they had hired and traveled up the west coast again seeing more of the great reef pools, caverns and caves. The following day we hired a jalopy and continued the tour of the island covering the eastern, southern and northern parts of the islands seeing more caves and hiking through the lush rainforest.

Niue is known for having great diving and snorkeling with amazing visibility – easily in excess of 200 feet and no sharks! 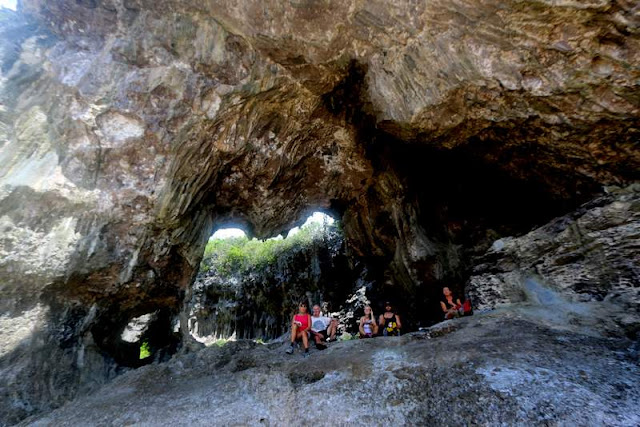 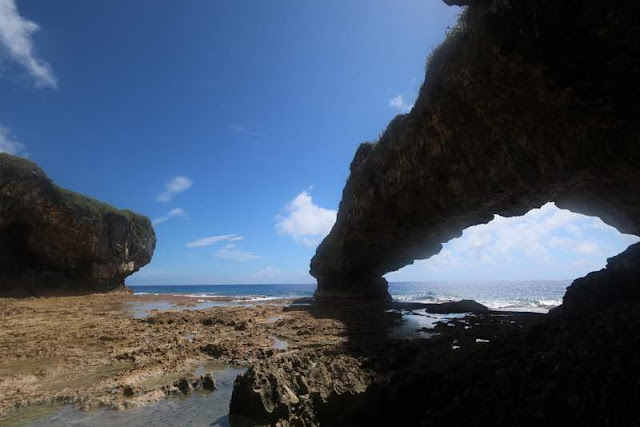 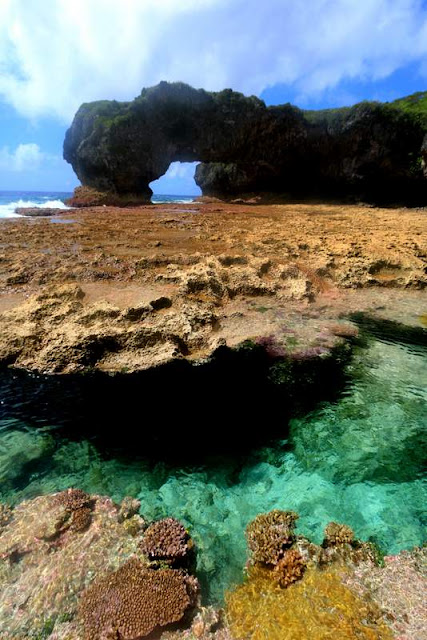 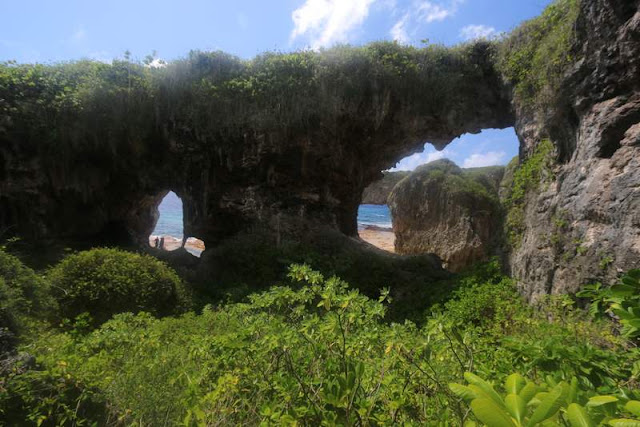 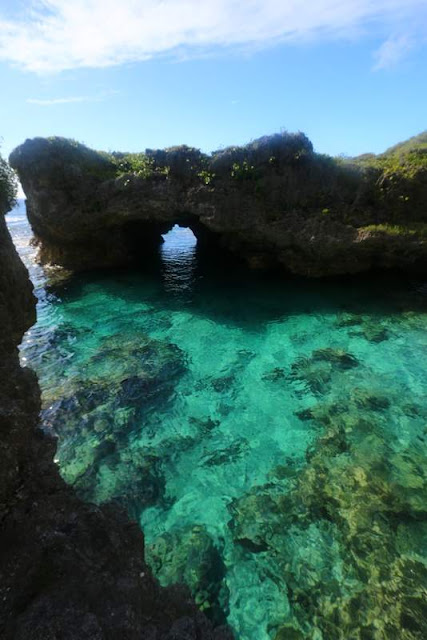 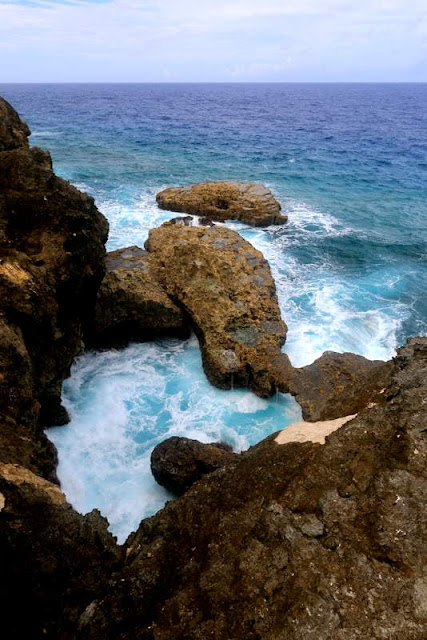 Neil, Jesse, Marks, Ursula and I did a dive from the wharf and along one of the western reefs seeing more Moray eels and plenty of sea snakes or kraits which have a venom 20 times more deadly than any land snake, lucky enough they are docile and their mouths are too small to bite, or so they say. 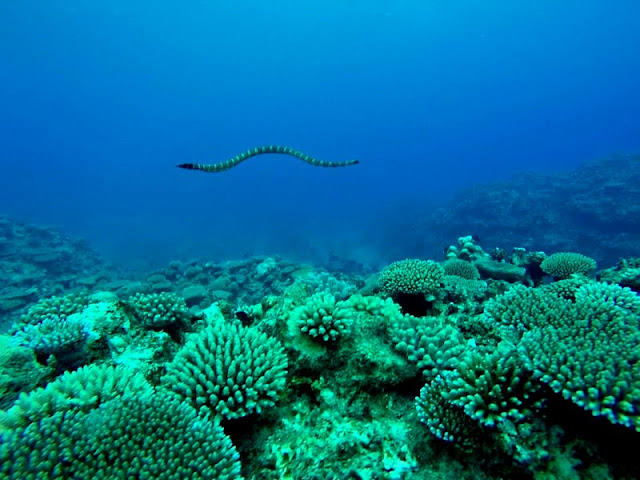 Niue was a great surprise for us. We loved everything it had to offer and would recommend fellow cruisers, or anybody else for that matter to visit, a week would be enough but there is plenty to see and do.

Posted by Sailing Sarita at 2:12 AM 2 comments:

We finally picked up a mooring buoy just south of the dock in Niue, next to our friends on Red Thread. Even though the water was 90ft deep we could see the bottom clearly just like it was 10 feet deep. No sooner than we had tied off the mooring lines two male humpback whales surfaced a few hundred feet from the boat, both slapping their tales is a show of power to win over the affections of a female. Its great to see the whales again!
Posted by Sailing Sarita at 8:28 PM No comments: 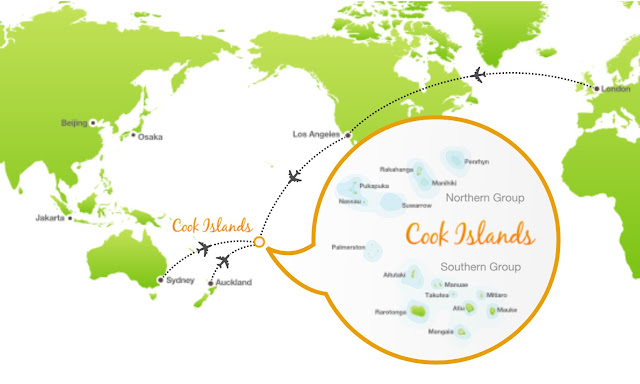 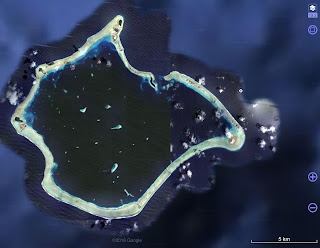 It has been 9 days since we arrived in Suwarrow and after the initial surprise and frustrations of the “RULES” signposts everywhere we have really grown to love this tiny remote island for many reasons. It is true that things have changed here for cruisers over the past few years: no longer are you allowed to scuba dive, visit the other motu/islands in the lagoon or eat the coconut crab with impunity but Suwarrow still has so much to give. Harry and his son, Pae (pronounced Pie) the rangers turned out to be wonderful people. They entertained us on some of the evenings with their tales of living in the Cook Islands, sang local Polynesian songs while playing their guitars with fishing line for strings and we shared other stories, learning so much about the island and their culture. We will be sad when we leave this small slice of paradise. 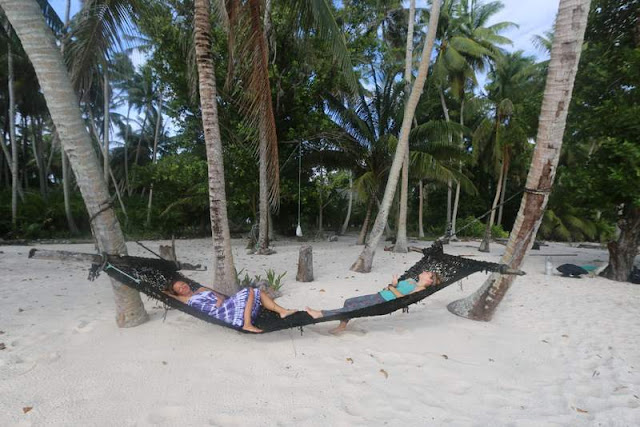 Described by Louis Steverson’s wife as the most romantic island in the world or Treasure island, it is a low lying coral atoll and is the southernmost island of the Northern Cook Islands, if that makes sense. Named after the Russian ship Suvorov who visited the island in 1814 the atoll is landlocked apart from the single pass. It has a small number of motus, or small islands, with trees with Anchorage Island being the largest and the residential home for the two Cook Islands National park rangers, Harry and Pae. The island is approx. ½ mile long and 300 yards wide. 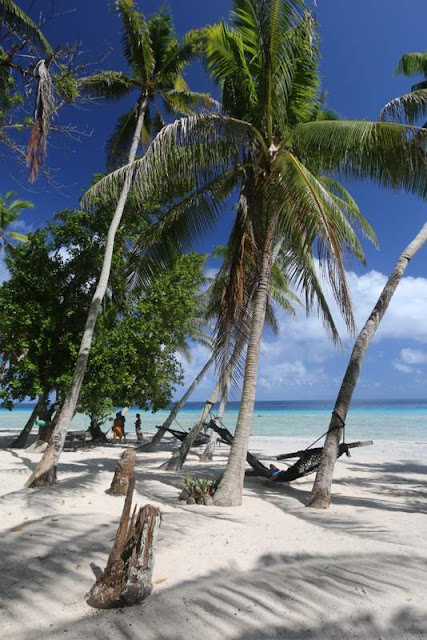 Suwarrow is truly a treasure island as in 1876 somebody found gold pieces of eight and jewelry in a turtle’s nest on one of the islands and then a Tahitian salvage ship unearthed an iron chest holding some US$5million worth of coins. Other evidence of human settlement has been found and speculation that a Spanish ship was shipwrecked in the 1700’s due to a musket, skeletons and lime kilns being found in the 1870’s.

The island is also known as the home of New Zealand recluse Tom Neale, who spent a total of 15 years on Anchorage island between 1952 and 1977. His tale is available to read in his book "An Island to Oneself" available by clicking this link.

The island has much to offer including great snorkeling, swimming and fishing although you have to be comfortable with swimming with numerous sharks and know when to get out of the water when their numbers increase or they start acting aggressive.

Suwarrow is now a national park and the Rangers not only act as customs and immigration officers but park wardens ensuring that this wilderness area is protected. 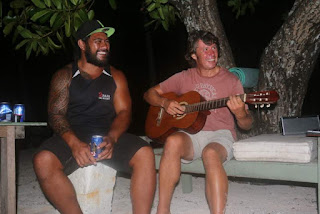 During our 9 day stay in the island we tried to pack in as much as we could. We walked around the island with is colourful reef fish in abundance and watched the numerous reef sharks feeding on the northern side of the island where there is a break in the reef. We dinghied out to a shoal area in the lagoon where Manta rays congregate each morning for their dialing clean by smaller fish. Watching these graceful creatures is quite a delight. We dinghied to Perfect reef in the south of the atoll with Neil and Jessie on Red Thread and marveled at the snorkeling in a mini lagoon. Coral Pinnacles, caverns and canyons and many large schools of Parrot fish made this snorkel quite special. Neil and I had done some reconnaissance the day before, looking at Perfect reef and another, Lewin Reef but decided easily that Perfect reef was far better. We had also encountered a slightly aggressive grey reef shark in Lewin reef which was a bit too interested in us so we decided to get back in the dinghy. We had a similar situation on the outside of Perfect reef where we encountered a few reef sharks but they soon started multiplying and increasing in size with black tips white tips and grey sharks. Neil had brought along a spear and had to nudge one shark that came too close. We decided that it would only take one bigger shark to come along to turn the day sour so we decided to get back in the dinghy and head home. 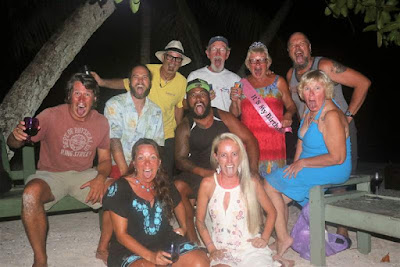 Betty-Anne from Confidence had her birthday while we were in Suwarrow so we all had a great evening on the beach with Harry and Pae kindly entertaining us. We brought along our Webber BBQ and the 4 boats that were here all brought along a dish. Neil and I had been out on the reef the previous evening hunting for lobster and we caught two nice specimens. Jude cooked them up in a garlic and cream sauce – nothing like home caught, home cooked lobster!    Harry took us all into his camp and showed us the resident coconut crabs. These amazing creatures looking like half crab and half spider can be huge weighing in at over 8 lbs and can live for up to 50 years. Not so long ago it was feasible to catch and eat these crab when visiting the islands but now they are trying to limit their takings and only Cook islanders are allowed to eat them. We watched these lumbering creatures crawl about the ground and easily climb the coconut trees where their strong claws can easily cut down coconuts and get inside the nuts. 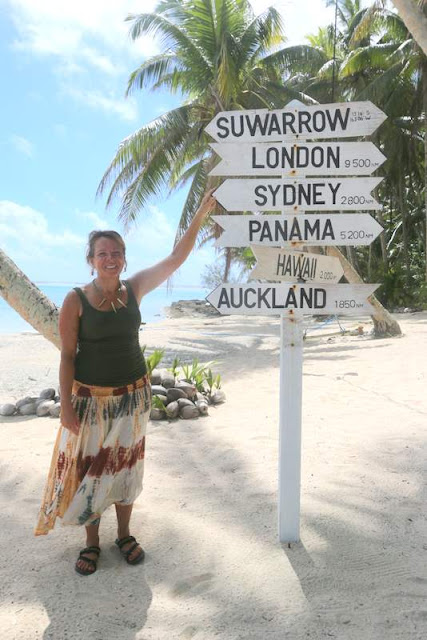 Pae kindly spent an afternoon with us and Neil and Jessie on Red Thread teaching us how to open coconuts and gave us instruction in self-defense, Katya thoroughly enjoying being able to easily put me on the floor.

Posted by Sailing Sarita at 5:27 PM No comments: