Bula! After an initial uncomfortable start to the passage with 25-30knot winds and confused seas things settled down, partly due to us deciding to head off the rhumb line to put some more apparent wind in the sails which in turn stops us rolling from side to side, particularly important when winds are light or the seas large from the beam as this causes the sails to flop and the rigging gets undue stress. The downside of heading off the rhumb line is that the distance we have to cover is longer. Quite often this extra distance can be covered in less time as more apparent wind equals greater speed a quick calculation gives us: a 10 degree alteration from the rhumb line requires a 1.5% increase in speed to equal the same travel time or VMG, 20 degrees requires 6.4% increase required and 30 degrees requires 15.5% increase. This does assume that the wind angle stays consistent, which rarely happens. Murphy’s law. So we altered course by 25 degrees which requires an increase in speed of 10.3% so we were traveling 6 knots and now we have to travel 6.62 knots which we managed to do and with the benefit of a much better ride and less stress on the rigging. 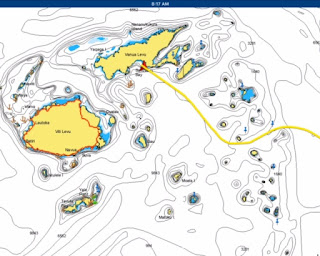 We decided rather than head north around the islands towards Savusvu we would cut through Lakeba pass and sail through the islands as we would be transiting the pass at or around dawn. As we approached the pass another vessel was approaching us from astern, clearly heading for the same pass. It was around 5am and I was unsure if they had seen us so I hailed them on the VHF to make sure they were aware of us. We still had well over 100 miles to go to Savusavu, our port of entry and as the seas had calmed considerably I poled out the headsail and we sailed dead down-wind all through the night arriving at our destination at dawn.
We hailed Copra Shed marina, one of the two marina’s in Savusavu and arranged to tie up at one of the dock s and check in. Over the next couple of hours four officials came on to Sarita to perform immigration, customs and bio security services, unfortunately it was a public holiday and we had to pay overtime charges making our total clearance charges to be around US$200 – ouch. There were all very pleasant although one of the officials did request a “contribution” to his personal costs, which we polity ignored and nothing more was said.

Since arriving in Savusavu the wind has been blowing outside of the safety of the marina and it has been raining but we have enjoyed exploring the town, hiking daily in the hills and visiting its great value restaurants with lovely Indian curries – oh yum yum. We are now waiting for the weather to calm down so we can head east to rainbow reef and do some diving.
Posted by Sailing Sarita at 1:51 PM No comments:

Our departure from Niue was a bit unplanned as a large swell from the west started to come into the anchorage and set us oscillating like a metronome 25 degrees from one side to the other so we decided that it would be better to have a sleepless night and be moving towards Tonga rather than just sitting in the anchorage and not sleeping, so it was action stations to prepare Sarita for the passage – stowing everything that might move and checking our various systems and plotting our course. We ended up departing at 6pm, just as the sun was heading over the horizon. 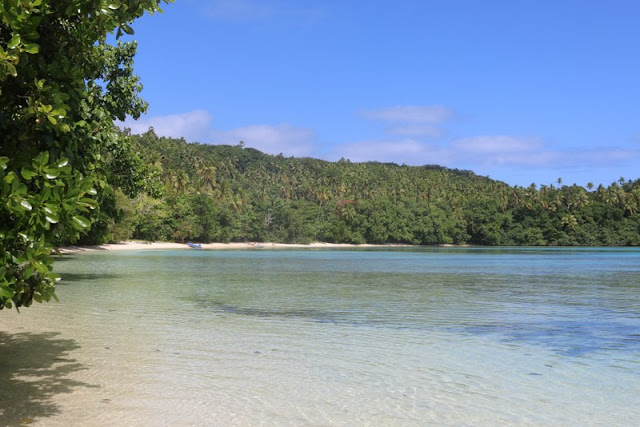 The winds were 25-30 knots on the beam giving us an apparent wind forward of the beam and therefore lots of water over the bow in seas of 2-2.5mts but we were sailing fast, for us at least – 8 knots so we were happy. During the night the winds died down and shifted to more aft and the passage became quite nice. Dawn arrived just as we were approaching the islands of the Vavau group in northern Tonga.  Thankfully our mainsail is still holding out and our new one should be on its way in the next week or so – fingers crossed.

We tied up at the customs and immigration dock alongside some British friends on Romano who had been waiting 4 days to clear into the country. We were boarded within 15 mins by one VERY LARGE gentleman and his colleague followed by another lady from the Ministry of Health. Forms were completed and signed and then stamped by the officials and money exchanged for their services. The officials were somewhat stupefied and they admitted that it was probably due to their Kava session the night before, Kava being a root of the pepper plant which is ground up and has some mild intoxicating effects.


Once cleared we picked up a mooring buoy and a great price of US$6 a night and went into town to explore. The town of Neiafu was much more rundown than Alofi in Niue and the supermarkets were not as well stocked buy the fruit and veg market was much better. They also had great wifi so we made the most of all the access and called home and caught up on news and other happenings.

Once provisioned we headed out to one of the islands of the Vavau group to relax and plan our next passage. Originally we had decided to get our new sail sent to Tonga but as the interisland ferry was out of commission nobody could give us a clear date when we might receive it so we decided to have the sail shipped to Fiji instead, this would however mean that our time here would be less than intended. We explored a few of the islands and anchorages and had a wonderful time in Swallows cave. The weather was not that great as we had quite a bit of rain and the winds were constantly in the 20knot range making many of the anchorages untenable.

We departed Tonga in winds of 20-25knots sailing through the islands towards Fiji, passing a number of whales that inhabit this area at this time of year.
Posted by Sailing Sarita at 6:08 PM 1 comment: