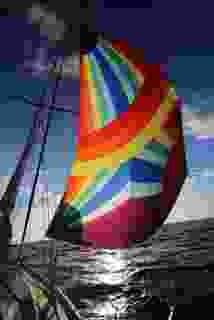 As you can see from the report above the winds have lightened to less than 10 knots and are now from the east. We raised the spinnaker yesterday afternoon and decided to leave it up through the night rather than turn the motor on. The forecast was for winds of the same through the night and tomorrow so we decided that it was safe to leave the spinnaker up but we would watch the barometer to see if it would drop or rise, signaling a possible increase in wind. We are supposed to be in he middle of a ridge, hence the low wind speeds. We have decided to head to Coffs Harbour rather than carry on down the coast as a low pressure system will effect the Newcastle region on Wednesday bringing strong southerly winds so we will wait it out in Coffs.

Last night was wonderful: the seas were flat as we drifted down wind with the large bright spinnaker dragging us along. We could walk around the boat without having to hold onto the grab rails and Jude cooked a delicious roast chicken supper with all the trimmings which we ate in the cockpit as the sun gently dropped below the horizon. We were going slowly but it was lovely.

We have seen no wildlife since the Dolphins gave us the send off from Noumea that is apart from the growing number of jelly-fish which signals our arrival into the Australian waters and all the deadly creatures it holds.

As we approach the coast of Australia our excitement is building, this day has been a long time coming and mostly it has seem too far off to think about but now we are just a few hours away. We are trying to eat all our food that would be confiscated if we bring it into Australia, basically anything it seems.
Posted by Sailing Sarita at 12:22 PM